The Misadventures of a Traveling String Quartet

As we are in the dog days of summer, with everyone in the quartet scattered about doing their various summer projects, it seemed a good time to blog about travel. Not the fun kind that takes you to your favorite vacation destination, but the very different, very specialized business travel of a string quartet. [WARNING]: As the cellist in the Serafin, I probably have the most gruesome war stories to share - some of this is not for the faint of heart.

While we do not travel as much as some quartets who tour for the majority of their work, Serafin Quartet has taken a number of trips by plane and automobile, and the travels, while usually fun and fulfilling (certainly from the performance standpoint), offer unique challenges. Traveling by car is not too big a deal, other than the extra time and energy required to be on the road. In our trips, we have tended to travel in pairs, mostly because of logistics of where we all live, with separate departures from Philadelphia and Wilmington. Driving together to concerts and tours has been a wonderful way to get to know one another and enjoy each other's company. The most compelling reason to drive to destinations far away, instead of flying (we have driven as far as Atlanta from our home base), is my darn cello. We have flown too, but it's a special, and expensive, challenge.

Given that I play a nearly 300-year-old Italian instrument worth way more than I am, we always purchase a seat, so flying to a concert means purchasing five tickets, not four - a pricy proposition, even if the concert presenter is paying us pretty well. You might be thinking, "But won't the good people at [insert your favorite carrier's name her] Airlines take good care of the cello in baggage if you tell them how valuable and fragile it is?" My answer to that, sadly, is this: 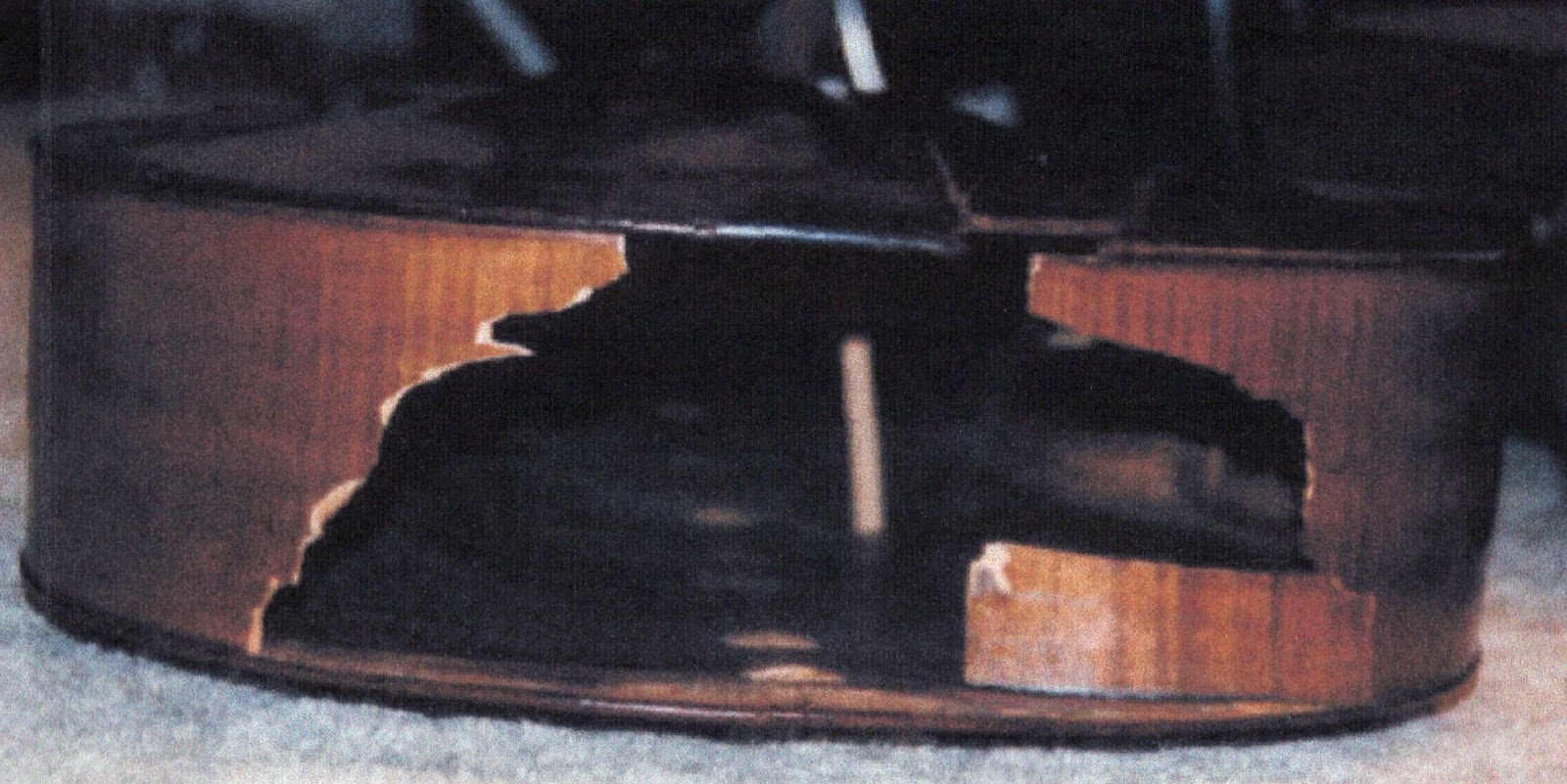 This (not the Testore, but a couple of cellos ago) is what happened the last time I checked a cello as baggage, in what I thought was a very secure travel case, back in the summer of 1996. When confronted with this evidence, the head of baggage at La Gaurdia Airport, for an airline not to be mentioned (but it rhymes with "Flaberican"), actually wondered aloud that perhaps I did this to the instrument so I could get some money back. So, no, I don't check the cello anymore.

Flying with the cello as a ticket-holding passenger is a very special way to travel, sometimes horrifying, sometimes hilarious. I've worked on some pre-emptive responses to well-meaning folks at the airport, such as "Don't worry, it fits through the X-ray machine" and "No, I don't wish that I played the flute", and I still get a quasi-sadistic sense of giddiness when I see the horrified look on a flight attendant's face, right before saying "It's okay, it has a ticket". While my SSQ colleagues get to their seats and put their violins and viola in the overhead compartment, I go through the process of getting a seatbelt extender and strapping old Testore in its seat, usually with a few more pre-emptive remarks: "Yes, full fare, I'm afraid", "Yes, I should get its snack" and, oftentimes a reprise of "No, I don't wish I played the flute."

Other than the photo-evidenced incident above, though, I have generally had pretty smooth sailing, including our flight to London a few years ago, where the very earnest people at British Airways secured the cello into the seat for me in such a way that it would have likely been the only one on board to survive a major crash. It looked something like this:

Some other cellists, and recently some notable ones, have not fared so well in their travels. The troubles of famed cellist Lynn Harrell with Delta Airlines were just highlighted, to typically hyperbolic and hilarious effect, by Stephen Colbert of Comedy Central (watch at your own risk!):

A few years ago, Greg Beaver, of the wonderful Chiara Quartet, was told he had to upgrade his cello's tickets to first class to be able to board and fly. Seeing as that would have destroyed any earnings the quartet would have made, he had to send his wife (also his quartet mate) on the flight with their 11-month-old daughter while he waited for another flight with a less combative flight crew.

And earlier this year, touring cellist Alban Gerhardt had his bow and cello damaged (the bow most likely destroyed) when a TSA agent carelessly closed the case after inspecting it.

So, it can be a big challenge for us to travel, particularly flying with the cello, but when it comes down to it, it's a worthwhile hurdle to overcome in getting to do what we do, even without the frequent flyer miles.

The Magic of Outreach Concerts


It's the start of summer! Like so many families, organizations or other groups at the end of a season, we Serafins were engaged in some planning for the next season recently. We are excited about so many upcoming concerts, some of them are special "outreach" concerts and I thought it would be a good time to talk about what that actually means as its an important movement in classical programming these days.

If you've never been to an outreach concert (sometimes called interactive, maybe even educational outreach or depending on the audience "family" concert) it means that we performers will be trying to engage the audience beyond just sharing beautiful music. Everyone in the quartet has engaged in different types of these performances. It could be as simple as talking to the audience about who we are, showcasing each instrument alone briefly if (usually younger) audiences aren't familiar with each instrument. It could be quite musicological or theoretical, like a concert we recently played at Dickinson College where we spoke of the structure of our Beethoven op 132 quartet, breaking down sections, playing motives and counter motives in isolation and showing how themes transform throughout movements. This was for a class with some prior background in musical history and theory. For another outreach event, we got a little more abstract, engaging with a poetry class and hearing the aspects of rhythm, meter, syntax or even phonetic artistry they were relating to in our music. Here it's really important to note part of the magic of outreach concerts: they are a two way street! We in the quartet are so inspired by our new knowledge of audience perceptions that it changes how we play! Hearing how the audience responds to a particular phrase, or sound heightens our own awareness of that element and colours our feelings about it when we play.

Of course the idea of pre-concert lectures is nothing new, but an exciting aspect of many new outreach performances is that they try to engage listeners with multiple intelligences, not just analyzing the piece or providing a historical framework, but actually getting audience members to use their own musical skills to experience important elements in the piece they are about to hear. They might use clapping to experiment with rhythms, or conduct expressively, sing through some motives or direct harmonies. In other words, audience members get to improvise musically, guided by the musicians to get a thrilling sense of what it might feel like to create music. This new brand of outreach concerts is the subject of my dissertation and I'm thrilled to be playing in a group where every musician is up for experimenting with different kinds of concerts. Of course, we also will always love the traditional kind of concerts. To me personally, the music we play is often so deified in my mind that it deserves only the most holy temple, a concert environment of stillness and absolute simplicity to frame the piece.

So, dear readers/audience, I would love to hear from you: have you ever been to an outreach concert that was meaningful to you? What different experiences have you had beyond traditional types of concerts? Come talk to us after a concert and maybe you can be part of our planning sessions in the future.

Til next time,
Esme

Posted by Serafin String Quartet at 1:04 PM No comments: