I can’t help reflecting on our amazing Beethoven experience, having just returned from the culminating week of our Beethoven violin sonatas project.  As an off-shoot of Serafin String Quartet’s performance activity, Tim and I presented all ten Beethoven violin/piano sonatas with five different pianists, on three different series in 4 states, between March and June 2010. A Beethoven Odyssey, indeed!

I have wanted to revisit these great works, having played all 10 with my brother, William, on a series in Florida in the late 1990's. I had the idea to do so with my SSQ colleague, Tim, and with a number of pianists. Tim seemed keen to join in on the project, and we ended up being able to present all 10 sonatas on three series (Wilmington, DE; Abington, PA; and at Classicopia Festival in VT and NH). We performed a total of 12 concerts and collaborated with 5 pianists - each interesting and wonderful in their own right! Tim and I each played all 10 sonatas - taking 5 each in the first run, and then switching.
In the final concert in Norwich, New Hampshire, on June 20th, Tim concluded our adventure playing, after intermission, the “Kreutzer Sonata” like a real champion, following my romp through the A Minor (#2) and the “little G Major” (#8) on the first half. I must admit to a tiny tinge of professional jealousy at his stealing the show – but that was quickly and completely overtaken by my collegial pride at his fine playing (and also by my relief that it was not my turn to play the “Kreutzer” in the 90-degree, un-air-conditioned church where the series was held!!).  It was so hot and humid that the pianist quickly turned his handkerchief into a dripping washcloth, and up-ended a cup of water (partially onto the keyboard’s octave below “middle C”!!) when he too hastily reached to quench his thirst after the furious first movement.
Aside from this very famous Sonata #9 in A Major (written about by Tolstoy and usually chosen above all other sonatas by every violin virtuoso programming a recital) many of these ten masterworks are little-known, even by violinists, and most are rarely performed. And, as Tim and I discovered – oh, what everyone is missing!!
Our first discovery was that each and every one of the ten sonatas is a masterwork and a gem in the repertoire. The next thing we found out is  - they are all tricky and difficult to master!! The relationship of these works to the majesty and intimacy of the 17 string quartets is resonating with me profoundly as Serafin Quartet starts work on the String Quartets Op. 18#2 and Op. 132 - both of which SSQ will perform in the 2010-11 season. I feel that, due to this amazing sonatas project, I have a deepend understanding and stylistic conviction about Beethoven and his chamber music. It is such incredible art that it never grows old or dull. There is always more to discover - and I look forward to sharing that with my quartet colleagues and the audiences next season!
Posted by Serafin String Quartet at 7:23 PM No comments:

The Recording – A Reminiscence 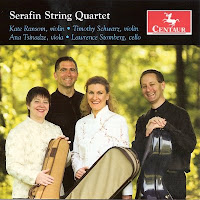 With our first commercial CD now out and available, and with the recording of the CD falling exactly one year ago this week, it seems a good time to look back at the crazy, memorable and chilly adventure of the process.
We were very excited to have gotten our recording contract with Centaur Records, and were all geared up to go for the recording (music by Still, Dvořák, Barber and Gershwin).  Through Larry’s position at the University of Delaware, we lined up the lovely new Gore Recital Hall at UD’s Center for the Arts for a couple of weeks in June, a nice quiet time on campus after school was out of session.  We were also very happy to get the wonderful engineer/producer Andreas Meyer to work with us.  Andreas really knows his craft, has great ears and a wonderfully calm demeanor in the recording process, and he’s just a great guy.  We knew our repertoire well, having performed it a good deal leading up to the sessions, so all in all, it was the best we had ever felt going into a recording project.
Enter the unexpected circumstances.  A week or two before the first recording session was to begin, Larry received an email warning that the university’s annual campus-wide “steam shutdown” would be happening during our first week in the hall.  They mentioned “oh, the air conditioning stops operating normally” and that the temperature/climate would be “a little cool and clammy”.  Armed with long-sleeved shirts, if needed, we ventured to the hall that first morning, June 8th.  Temperature in the low-mid 60s.  We were starting with the Barber Quartet – you know, the one with the famous Adagio, really slow, needing all sorts of extra bow control, vibrato control, etc., things that are a little hard to come by with temperatures in the low-mid 60s.  Along with this, Kate was starting to suffer from a nasty cold, with a cough starting to creep in.  Luckily, Kate is never without cough drops, so she was covered for that part of the problem.
We gave it a good old college try, and managed to get through that first day (walking outside to lunch, in the mid 80s weather of June in Delaware, felt wonderful!).  For Day 2, we figured we could make it through some more Barber and get started with Dvořák “American”, and had sweatshirts to cope.  The sweatshirts were nice, but the few-degrees-cooler temperatures in the hall were not.  On top of this, Kate’s cold and cough were a little worse – she was now armed with a thermos of tea as well as the cough drops.  Nevertheless, we finished up Barber and got some good headway in the Dvořák.  And lunch, again, was very nice (and warm).
Day three – temperatures had stabilized around 60, maybe 59.  Larry brought a space heater and a couple of heating pads, Kate still had her cold remedies, and if memory serves correctly, icicles were forming on Ana’s viola.  We did more Dvořák this day, though it is challenging to play this ebullient, folksy music when you can’t feel your fingers.  Lunch – superb (and warm).
At this point, we broke for the week, mostly to thaw, but also to give our heads a rest going into three days the next week.  Andreas was wonderful in the recording sessions to this point, and started to get some preliminary edits ready to listen to during our down time.  The steam shutdown was only a week long, so we were excited to return Monday to gloriously normal temperatures, and hopefully improvement in Kate’s cold.
Day 4 (Monday, June 15) - Temperature in the Hall: 55 degrees.  They were just getting buildings back on line for normal AC, and hadn’t gotten to the Center for the Arts yet.  Thanks to a quick call from Larry’s colleague at UD, Tamara, they got things going; however, heating up a big concert hall takes a number of hours.  So, we all piled backstage, where Andreas’ equipment was, and decided on some edits for the Dvořák.  Then lunch – once again, warm.  After lunch, temps were a little better, so we launched into the William Grant Still Panamanian Dances.
Days 5 and 6 were finally in a normal climate, and it seemed that Kate was a little bit better.  We finished the Still, recorded the Gershwin Lullaby the morning of Day 6, and then spent some time re-recording the Barber Adagio, now that we could use vibrato without fear of a frozen finger snapping in two.
Normal view of Gore Recital Hall 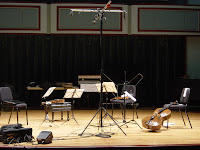 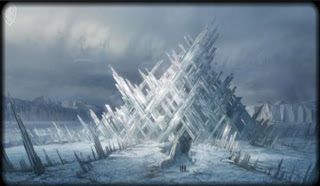 View of Gore Hall June 8, 9, 10, 15, 2009
We survived the frozen tundra of Gore Hall, with a couple of caveats.  All of the wonderful lunches in downtown Newark, DE, caused Tim and Larry to fret over how much weight they had put on in two weeks.  This overindulgence only continued a couple of weeks later when the quartet went down to North Carolina for a week teaching and playing at the NC Suzuki Institute (at our favorite restaurant in the south, Atavola in Greenville).  The Barber was also a casualty of the temperatures; while we had some good stuff for the CD, we were compelled to go back in early September to re-record, with much happier results.
Despite the drama and unexpected turmoil, the recording session was a wonderful experience of growth for the Serafins, and we are very happy with the product.  Don’t forget to order yourself a copy!
Cheers,
Larry
Posted by Serafin String Quartet at 9:16 PM No comments: